Cleavant Derricks was born on May 13, 1910 in Chattanooga, Tennessee. After receiving his formal education, he became a noted songwriter, pastor, and choir director serving churches in Tennessee, Wisconsin and Washington, DC.

One of his earliest popular songs was "We'll Soon Be Done With Troubles And Trials," first published in 1936 in the Stamps-Baxter hymnbook Pearls Of Paradise. "Just A Little Talk With Jesus" was published a year later in Harbor Bells No. 6. Like many songwriters of that time period, Derricks was compensated for his songs with a small quantity of free songbooks.

The Derricks Singers were formed in the early 1950s. Group members included Rev. Derricks and several of his church members. They recorded a few 78 singles on the Tennessee Records label.

In January 1975, an employee of Canaan Records was surprised when two men came into her office looking to publish some songs. One of them claimed to be the writer of the famous "Just A Little Talk With Jesus." She quickly introduced him to producer Aaron Brown who verified Rev. Derricks was indeed who he claimed to be. Brown offered to record some demos. Rev. Derricks ultimately recorded two LPs for Canaan Records along with several members of his family. Reverend Cleavant Derricks And Family Singing His Own Just A Little Talk With Jesus was released in 1975 featuring the title cut as well as nine other songs written by Derricks including "My Soul Has Been Set Free," "When God Dips His Love In My Heart," "When He Blest My Soul," and "We'll Soon Be Done With Troubles And Trials." Satisfaction Guaranteed was released in 1976, and earned a 1977 Grammy nomination in the Best Traditional Soul Gospel Performance category.

Upon learning that Derricks had never received royalties for many of his songs, producer Aaron Brown contacted BMI and convinced them to pay Derricks royalties for a six year period. It was reported that the check amounted to more than $14,000. Derricks would only have a short time to enjoy the financial blessings from the songs he had written forty years in the past. He passed away on April 14, 1977. 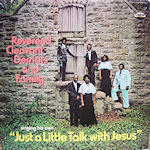 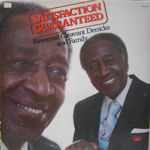